Stonehenge is a large monument made of stone. It is located on a plain north of the city of Salisbury, England. The monument has continuously evolved over a period of about 10,000 years. The structure that we call “Stonehenge” was built between roughly 5,000 and 4,000 years ago and that forms just one part of a larger and highly complex mosaic sacred landscape to a whole culture of people.

What is Doctor Parker-Pearson’s theory about the function of Stonehenge?

Dr. Parker-Pearson believes Stonehenge was just half of a vast religious complex part of a grand vision. He believed it was used to house the spirits of the dead. It was linked to another mysterious sacred monument and prehistoric city lost for 4,500 years. It was a puzzle to a revolutionary new theory, it is part of something much bigger, it is just one element of a much bigger design. He believes it was built for the ancestors as a home, a domain for the dead. At dawn people gathered at Stonehenge starting a very important day to thank there ancestors for bringing life to the land and making it fertile again. This is the moment they have been waiting for… Stonehenge aligns to the rising sun and the sun passes through the standing stones and its perimeter and directly through a vast standing arch now known as the trilathon. Pearson believes the sun rise ritual was just the beginning. This leads to the greatest revelation yet… Durrington Walls.

What does Pearson think was the function of another monument nearby that resembles Stonehenge (made of wood) Durrington Walls?

Durrington Walls is other half of the vast religious complex. Durrington Walls may have possibly been a trial run in wood before building it in stone. Thousands traveled to the area to take part in rituals marking the cycle of life and death certain times of the year. Great precessions they walked down wide avenues to the river Aven that runs between the two monuments. They took their dead to join there ancestors at Stonehenge and in return they received from the ancestors the gift of life and fertility. Wood doesn’t last forever just as our  own lives don’t last forever, but stone will be there for eternity. At Stonehenge they paid there respects to the dead, while at Durrington Walls they celebrate life. They thank there ancestors for the fertility of their crops, animals, and themselves. The night of passage which we today call marriage. The young people were the fertility and reproduced bringing in the next generation during this cycle. Animals and new generations are born in same cycle so everything is in harmony with humans and nature.

What did he think was the connection between Stonehenge and Durrington Walls?

According to his theory what did people receive at Stonehenge that they then brought to Durrington Walls?

At Stonehenge people received fertility and brought it back to Durrington Walls where they celebrated life. 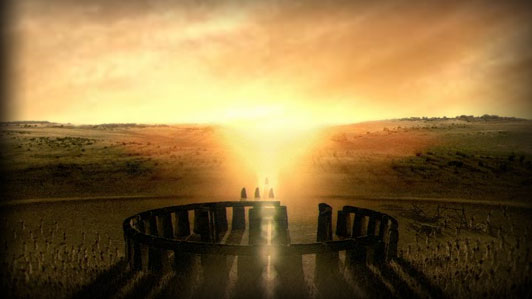